ABC comes to an end...well the tour anyway. 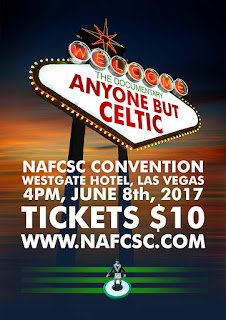 So we suspend crowd-funding on Armageddon today. This is the link if you want to invest before tonight's deadline www.ls86productions.com/armageddon

So the 'Anyone but Celtic' tour comes to an end in Las Vegas on Thursday. I had no idea how much this tour would take over my life since the premiere last November.  I was out every Friday and Saturday night from November to May with the occasional Tuesday, Wednesday and Thursday thrown in for good measure. My health suffered in this period, I put on a bit weight and my sleeping pattern was all over the place and still really hasn't recovered. In that respect adrenaline helps a lot when actually at gigs. Sometimes I'd be so exhausted that I would have to make a huge effort just to get out of bed to go to a gig.

Yet it's all worth it.

The point of the tour is to get the information out there. The film does a lot of that, the book even more and I hope to fill in any blanks along the way. Of course, it's not always like that. For example, I had my director prep on possible tech questions yet to this day no one has ever asked one. Also, I've had some really funny questions along the way (From "Should I get my Ronny Deila tattoo removed" to "Why don't folk rate Didier Agathe")

The best part of the tour is the people you meet. People seem demonised everywhere now but my experience has been brilliant. I've met more characters than Marvel have, received so much love and warmth and kindness too that it can overwhelm you.

I am also immensely proud of this. 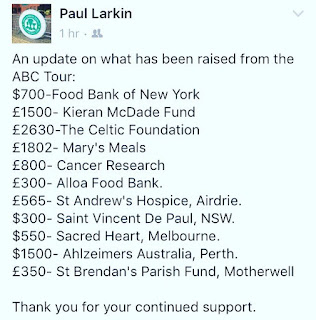 The above can't be done unless you have a lot of people pulling in the same direction. I don't claim credit for it, the credit goes to each and every person who made it happen, further imprinting the Celtic ethos around the world.

This will be my last tour of this kind any time soon. Armageddon is my total focus now and that will see a premiere, book, dvd and stream all released on March 2nd 2018 (Details of the premiere will be released on June 23rd)

In the meantime, I want to say thanks to everyone who has supported me and the tour. I am no one special. I am just a Gadgie who loves Celtic who won't lie down if I see us being cheated.

Enjoy your summer and I'll hopefully see you in Vegas.