No such thing as 'Fake News' 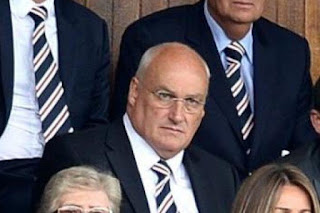 "There's no such thing as chicks with dicks, just dudes with tits!!!" is probably the line in a movie (Ted 2) I laughed at most in 2016. Sometimes you just need to hear something said bluntly to be like "Of course!!!" and, thankfully, I didn't need any personal experience to zing that one into my mind.

It is not difficult to pinpoint the time the Scottish MSM jumped the shark, it happened pretty much the day Sevco kicked their first ball at Glebe Park, Brechin in 2012. Since then, a web of lies has been spun better than a Pringle jumper in the borders of Scotland circa 1815. Leaving aside the usual trumpeters of Jackson, Jack and Williams, even some relatively sane journalists have bought in (or been bought off) to the ludicrous notion of the "same club" This has taken them to a level that is usually reserved for the Willie Frazer's of this world yet they actually demand to be taken seriously by the populous. This in turn has led to the likes of Barry Ferguson and Kris Boyd being elevated to the point where we are told their opinion matters. We are asked to respect two people whom throughout their lives have shown little, if any, respect for others. Barry Ferguson now is a regular Monday night feature on BBC's Sportsound. The official line is that it "provides continuity for the listener". The reality is it provides a platform for Barry to talk about ABC (Anyone but Clyde). Then there is Kris Boyd, a man who has found the perfect medium in Instagram to share his thoughts (For any huns reading, that's because he doesn't have to write). Kris was given a platform, again by BBC's Sportsound, to attack the incoming Hearts manager, Ian Cathro. This set a narrative of poison around Cathro who, as far as I can see, was guilty of nothing more than learning his occupation.

Dec 31st was a watershed in Scottish football. Celtic's win at Ibrox sent alarm bells ringing in the ears of everyone who banks on that blue pound. There had to be a change of narrative and there had to be money into Ibrox quicker than a Scott Sinclair dribble. So the ludicrous Red Bull Leipzig friendly was talked up like the World Cup final right up to the point of the fourth Red Bull goal. Then, Scotland awoke to the knowledge that it had a new saviour of the game in the form of the six million pound man Barrie MacKay. Well, that's a relief eh? I personally have been sitting around all of January praying that we would be saved and if anyone can do it, then Barrie must be that guy, eh? It was noticeable that this £6m bid, immediately dismissed as nonsense by Red Bull Leipzig, is still being talked about in the MSM as if it is real. Kind of like how they still talk about Bigfoot in Canada.

All this is done for one reason, the appeasement of the Sevco hordes.

We still live in a country where the MSM are simply the mouthpiece of certain people and there is even a phrase now been concocted "Fake News". Except it's not. They are lies. Nothing less. Lies with the agenda of  propping up the four year old club whilst attacking your senses.

And by the way, there are plenty dudes with tits in Scotland, you'll normally see them whispering in their ear.
Posted by Paul Larkin at 3:51 AM