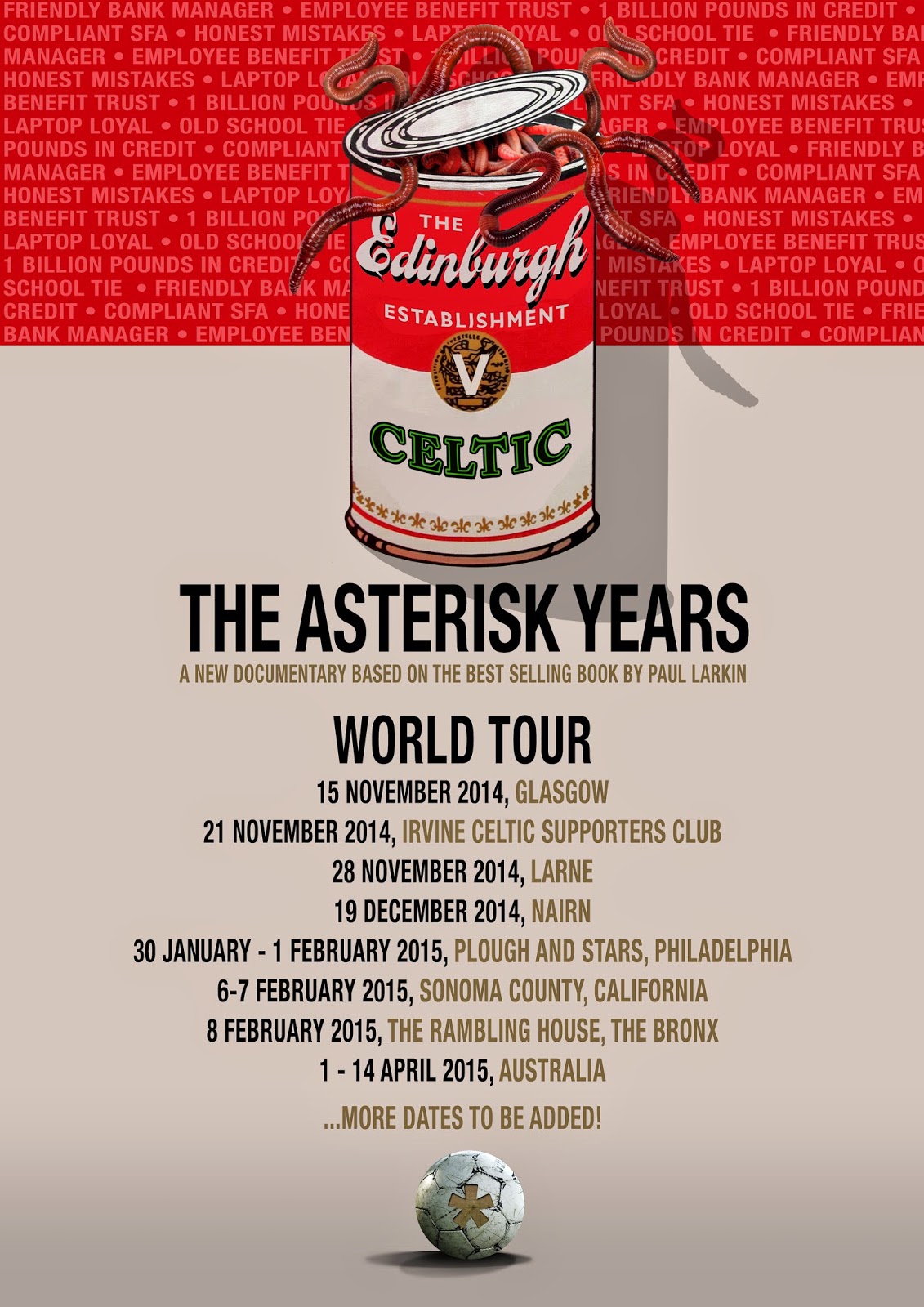 Are these the only places that the film is going to?

No. These are merely the first dates. Talks are ongoing with venues all over the world and more dates will be added.

Why isn't the film coming to where I am?

Because you haven't invited us!

Just ask us. It really is that simple.

What equipment would I need?

A laptop and a big screen/TV is the bare minimum.

Ok, does the venue need to be huge?

Absolutely not. Big or small, all things are considered.

How much will it cost?

We do deals based on the number of people that will be in your venue. We will ALWAYS try to ensure that your pub, club or CSC does well.

What else do we get?

I am happy to introduce the film and to do Q&A afterwards. I don't have to though.

Ok, you've convinced me, how do I get in touch?

You haven't convinced me, I hope it fails.

We're not running a popularity contest.

One last thing, where is the Premiere and how do I get tickets?

It's in Glasgow at 2pm on Sat November 15th. The venue is not being released just now for obvious reasons. Tickets are limited and on sale from July 11th. Join "Paul Larkin Books" on Facebook or the mailing list at www.theasteriskyears.com

So here we have the first ever trailer for The Asterisk Years documentary which is out in November.

There is another one cut and coming out we hope you enjoy this one in the meantime.

So we have a new assistant manager and it's been warmly welcomed by most. John Collins single-minded style has seen him gain critics but you get the impression that he couldn't care less. For Celtic supporters there a few things we care about and all of them lead to the team winning football matches. There are some concerns with Collins based on previous incidents but, perhaps, they only tell part of the story.

The most common of these is that no players will get on with Collins, he's too stubborn and not good with people. This comes from the player rebellion at Easter Road which, common to popular belief, did not force him out. The accusation was that Collins training and discipline was too much for the players. Yet two players at Easter Road then wouldn't agree. Benji and Zemmama are both devout Muslims. As part of that faith, they observe Ramadan in the ninth month of the Islamic calendar a lot of which includes fasting. John Collins not only changed their training routines to fit in with the custom, he also trained separately with both to show he was in complete support of their custom.

Something that is increasingly important to all fans is how much employees are in it for the money rather than the good of their club. I've seen it leveled at Collins that he is greedy that way, based on his move to Monaco on a free. Of course he did give Celtic six years of outstanding service before then but it should also be remembered that he took the Livingston gig on a very modest salary in order to ensure his children were educated in Scotland.

Of course in this climate one thing that is pertinent to many fans is the issue of, not to put too fine a point on it, is he a yes man? I doubt anything in his character suggest he is but let me point you in the direction of a story from a Celtic youth game last season. Celtic were playing well and Peter Lawwell, rather smugly, approached John Collins and asked him what he thought of them? John Collins proceeded slaughter the style of play and certain individuals in the team much to the shock of Lawwell and a stunned Celtic board.

So, this is the start of something new and it might just fit.
Posted by Paul Larkin at 8:55 AM No comments:

Two weeks on: Are we there yet?

So tomorrow (Thursday) will be two weeks since Neil Lennon resigned as manager. It's been a bit of a circus since then with a constant stream of stories from media outlets that have a lot of words but very little of substance actually in them, a mass outcry from Social Media any time certain names have been mentioned and, of course, a new bookies favourite every two days. Yet if we are to believe Peter Lawwell then no one has even been offered the job, so what exactly is going on?

It is clear that Dermot Desmond is taking the main role in this so it is difficult for Lawwell to drip anything out to his pet journalists like he did when he let a few know when he would be arriving at Celtic Park so he could give a brief comment on Roy Keane. At that point Celtic were supremely confident Keane would be the new manager and were effectively making a soft announcement. By Monday though alarm bells were ringing and it was clear Keane had got cold feet.  Celtic are pretty unhappy that Martin O'Neill leaked the talks and I think there's no doubt he did this to amp up the pressure on Keane staying.

Peter Lawwell has been in Ireland and Austria in the last week but none have anything to do with the search for a new manager. One was a supporters function and one is a UEFA meeting and it's clear his involvement in the process is slightly less than he would like.

Dermot Desmond has spoken to a few people in the game regarding our new manager, Gary Lineker and Gordon Strachan are but two, but it is not known what came out of those "advice" talks. Owen Coyle's name continues to be bandied about, I think primarily because he is golfing buddy of Desmond, but he flew out to Tenerife after the Hibs v Hamilton game and has had no contact despite people close to him briefing otherwise. Ditto Jackie McNamara who is a keen spectator from the sidelines.

So where are we? It's difficult to say but we could have a new manager today as easily as we could wait another week. From a fans perspective I don't think many buy into the whole "We are taking time to get the right candidate" stuff purely because there are plenty good candidates out there who are dying to take the job.

After Keane declared his lack of interest, I just wonder whether eyes have turned to another big box office type like Henrik and perhaps a safe pair of hands as his no2.

That's just a hunch though.

As Paulie Walnuts always says "Nobody knows what the future holds, my friend"
Posted by Paul Larkin at 12:10 AM No comments: