Not having witnessed any of the Amsterdam incidents first hand, I haven't commented on them, condemned them or condoned them.  I know that doesn't stop a lot of folk but I am old fashioned. From the grainy videos, I saw scenes that I really haven't seen much of when following Celtic anywhere. I've seen plenty heavy handed policing over the years, mainly in Italy and Spain, but I've never seen undercover cops suddenly appear like a firm and start laying into folk before they then arrest them (Maybe once in the film I.D. actually).

Let's get the basics out the way, some of the folk who follow Celtic to these games drink too much and can be total fannies. I know this because I have been one. In any group situation there's always going to be one or two who just don't behave in a normal fashion and it's normally drink fuelled (I do that even away from football matches) so there's no way I would become an apologist for that kind of behaviour, it's me that would probably need to apologise.

Of course things like this happen in all games, some of the worst aspects of this I've seen have been when Scotland have played at Wembley. For a lot of folk it's their one day out a year and they are going to ensure everyone knows they are there.

With that being said, there is no excuse for the policy of the Dutch police which was effectively legal thuggery. The vast majority of people who go to football matches just want to watch their team, support their team and have a good time doing so. For the vast majority of games I have been to this is exactly how it has been.

I know there is a bandwagon that surrounds this kind of thing and it gets jumped on by journalists, broadcasters and so on and we hear the glee that many of them report it with, even to the point of comparing it with Manchester 2008, so that Celtic's name can be dragged through the mud again.

As a support I think we are pretty good at most things and our awards, our invites to testimonials, the causes we support and the reaction to adversity are things I'd point at and say yeah, we are doing ok.

What matters now is that two young guys have been denied their liberty and they need released immediately. 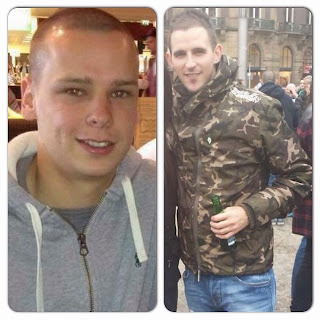 Follow @freepadraig and @freeandyvance to show support and do what you can.

Do what you can to support The Celtic Trust http://celtictrust.net/?func=d_home_article&id=449

Show the world, again, why we are the greatest.