Why Scotland needs The Green Brigade 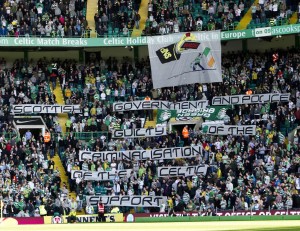 Are you, like me, sick and tired of the amount of bullshit that surrounds Scottish football?

If you put a microscope on the last few days in Scotland and Scottish football, you'll get a great insight into how it works.

First of,  let's look at some of the stuff on Radio Scotland on Saturday. The phone-in had Graham Spiers and Michael Stewart on it. Frank McAvennie was on as well but he was funny and talked sense. The topic of the Aberdeen job came up and a caller mentioned John Collins. Silence. There is a reason for this, Michael Stewart doesn't like him and Graham Spiers had just spent twenty minutes trying to get his mate, Derek McInnes the job. It got so ridiculous that Stewart even suggested his mate, Eoin Jess, for the job.

Of course, there was also the incredible, but not surprising, revelation from Jimmy Calderwood on Off The Ball that it was David Murray who got him the Dunfermline job. After a cosy wee chat with Gavin Masterton of course. My jaw dropped when I heard it and Stuart Cosgrove made comment that journalists would be typing up stories as they spoke. Stuart, you forgot the golden rule, David Murray can't be talked about unless he looks good. So no one in the SMSM is writing or investigating that huge story.

Reality? Some but it will peeter out.

Then there was wee Pat Nevin. A man so unpopular in the Everton dressing room, he was called "Dampness". He went on his high-horse(which would need to be a Shetland Pony) about the fact that young players always do better when they leave Celtic at 18 and used one Simon Donnelly as an example of someone who could have had a far better career had he left Celtic at 18. That's Simon Donnelly who played 160 games for Celtic, won a League, Scottish Cup and League Cup, and played a huge part in the most high pressure season Celtic have had since 1948.

Reality? Pat doesn't know the meaning of the word.

Then there is The Green Brigade. Loathed by some, used by others, loved by many, including me. What I witnessed at on Saturday, just off the Gallowgate, was reality. A reality that is sickening to me and many more. That a police force can be deployed in such numbers to stop a group of football fans walking to a game, is quite incredible. Further to that, The Green Brigade don't just support Celtic to the full and create an atmosphere at Celtic Park for every game, they are a positive force and fantastic social commentators as well. Don't agree?  Just look at their banners.

Incidentally, I'd like to thank Danny Lennon for bringing some reality to Radio Scotland on Sunday. As Chick Young interviewed him on the pitch, after St. Mirren won the cup, Danny said to Chick "You'll be delighted that at least one of your teams has won a cup this season, Chick"

*Agree with what I said about The Green Brigade? Think I'm talking pish? Call in the @homebhoys show tonight(Monday) from 7.30pm CPT. Add HomeBhoys on Skype and we will take your call.