Wee bit of flak came my way in the last couple of days. Couple of people have taken umbrage at my highlighting that Scottish football, and Celtic Park in particular, is far too expenive.

Fear not kids, energy is sourcing through my veins so much I feel like the fucking Duracell Bunny.

So, let's go back to what started all this pricing madness in Scottish football, or rather, who.

It was the Pieman Chris Robinson and his loathesome capitalist cronies at Hearts.

When we went to Tynecastle in February 1994, to see Charlie Nicholas get a brace in an otherwise drab game, the price was £7. 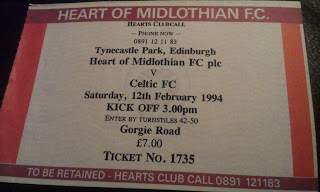 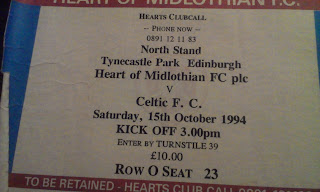 The writiing should have been on the wall with that outraegous increase but by October 1997, when Jackie and Henrik were putting them to the sword, we were up at £16! Two pounds more than we were paying to get into Ibrox that season! 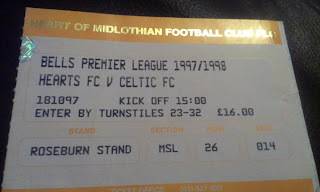 This kind of outrageous pricing policy soon became the norm at a lot of clubs, Hibs were next to follow suit which led to a boycott by, of all club's fans, Hearts. Celtic were not shy in shifting up prices then either. A season ticket in the 1995/96 season for the North Stand Upper cost £199. In season 2000/1 that had risen to £279.

Please Scottish football, give us back our clubs.