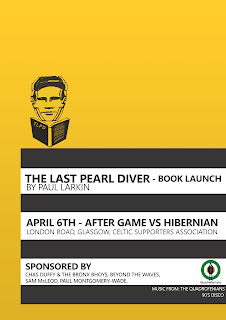 A novel. So a novel Book Launch. I do love writing and so when you get those horrible, dark winter nights, I tend to write. Similarly, when there is no Celtic in the summer, I tend to write. That's why books of mine tend to appear at the start of April and end of October. If they didn't, I'd probably have a football team of sons and daughters.

Start of April, end of October is basically my plan, primarily because I love it. I feel I am getting better although not good enough yet to deviate far from Celtic subject matter. 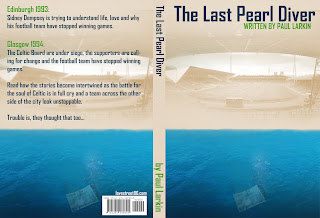 This book focuses on the troublesome period between March 1993 and March 1994 with one chapter set in May 2012. It is a novel but it does feature real situations, real people and the odd bampot or two as you have never seen them before...

Anyway, the launch. This one will be different to the others. I'm hoping it will be more intimate than before (although best laid plans and all that) as, for the first time ever, I'll be doing a reading from the book. I'll also be going far more in depth on the night about the book than I normally do on these occasions as I want to talk a lot about why I wrote it and who inspired me, hopefully all those people who did will be there on the night too.

As the book is set in 1993/1994, that will be a bit of a theme on the night, with some sounds from that era before the Quadrofenians come on and blow the roof off the place. They are a band I am delighted we have secured as I feel their style really fits with the kind of writing I do.

I can't tell you how much these launches mean to me and talking to the folk who come. Most of being a writer is a lonely experience so being able to talk about the work is really refreshing.

So, hopefully I will see a few of you along there on the night, for a few beers, a few stories, a few songs and a few laughs.

So, if you fancy coming along, get in touch with me @paullarkin74 or lovest86@hotmail.com