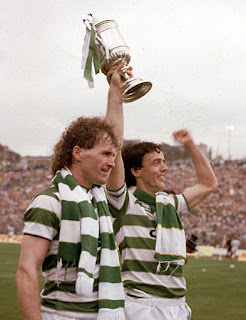 Walking back, devastated, from Hampden to the city centre yesterday had a horrible sense of deja vu about it. I've done it too many times in such a small time frame. Under Neil Lennon we have now lost five big games at Hampden and that has to change. Yesterday was Ross County all over again. Outthought, outfought and outplayed, every single Celtic player, coach and director needs to take a long hard look at themselves.

The players have to understand that nothing is won until the trophy is in your hands. You have to fight and scrap for anything in this game and the time to look back and reflect is when your career is over. How can I put it? Well Roy Keane wouldn't be getting a jersey framed after winning a game that had no trophy at the end of it, that's for sure.

The underlying thing about these players has always been that, in total adversity, can they hack it? Not on yesterday's evidence that's for sure.

Then I come to the manager, who has to shoulder a lot of the blame for yesterday. Dropping Rogne againat a team, whose whole game plan is to get the ball in the air to a guy up front to knock down for willing runners, was utter madness. Why Mulgrew was allowed to take that penalty is beyond me, you don't need to be Jose Mourinho to know he was never going to score it after the game he was having. Also, when dramatic comebacks are staged, most of the goals that make them happen are scrappy and coming from balls being fired into the box. So from now till doomsday I will never understand his three substitutions yesterday. No matter how bad Lassad, Samaras and Wanyama were...THEY CAN ALL HEAD THE BALL IN THE BOX.

This is a time when we should be hoovering up trophies, not surrendering them meekly like we have on the last three visits to Hampden,

When we think back to speactular Hampden wins, my mind drifted back yesterday to the 1985 Scottish Cup Final. The winning goal came because Roy Aitken burst his lungs to whip a cross in that Frank McGarvey dived to full length to meet.

That's why that game is legendary and yesterday is not.