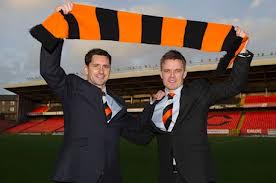 It's good to see good people do well. Dundee Utd have hired two of the best coaches, and nicest people, in Scotland.

It's a shame that Partick have lost them mid-season, and the two of them know how much of a wrench that is, but it was a job they simply could not turn down. Still relatively young in the game, Jackie and Sid have a clear determination to progress Dundee Utd with a belief that the current squad has underachieved and can do a lot better.

Celtic supporters will wish them all the best (especially on Saturday) and I'm sure more than me will be keeping half an eye on developments at Tannadice over the next few months and years.

So all the best to messers McNamara and Donnelly.

Except on February 16th of course.
Posted by Paul Larkin at 11:17 PM