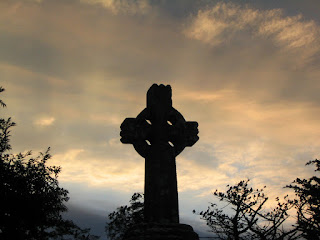 Things are changing in Ireland. Just certain people haven't caught on yet (Clue: They are the ones out every night trying to re-create Last Night of The Proms). I listen to a lot of Irish radio and, despite the horrific economic circumstance the country finds itself in, there is still a lilt in the voices I hear from callers on the various shows and my mind often wanders over there when I hear them, such is the warmth in the sounds.

The north east of the country is evolving, despite the reactionaries, in almost everything. There seems to be a determination to never to go back to the days of war and I also sense the real notion that a United Ireland is on the horizon at last. I've been a Republican for as long as I've known politics and, for me, the reason we are moving closer has a lot to do with the leadership of The Republican Movement remaining the same whilst all other parties fell by the wayside.

It struck me last night, and many times this season as it goes, that diehard Irish Tims, the ones, like Jim Mervyn and Jim Greenan, that you see everywhere with Celtic, are probably being done a disservice by Celtic. I see folk on Twitter like Gary McGeady, Hank Moody CSC and Muireann Fanning getting up at ungodly hours in freezing temperatures to catch boats and buses to come and watch Celtic. Whether they realise it or not, it's inpsiring to see that level of committment.

I've been doing some research on the formation and establishment of Celtic and no matter what Celtic say on the official website, it cannot be denied that Celtic had an Irish identity in mind on formation. The club was founded by an Irishman of course but let us not forget that it was also managed by an Irishman for the first 43 years of our existence. The club's top scorer ever, Jimmy McGrory, always said he felt he had Scottish blood but an Irish heart.

Perhaps in these times, given that playing in Scotland gives us a natural, albeit partial Scottish identity, it is time to shine more light on the part of us that is Irish. If you want to "promote the brand" then that's the thing many thousands will hook onto. After all, if a university in Indiana can do it, you can be damn sure we could. We will never lose the Scottish part of Celtic as long as we play in Scotland and we will always play in Scotland because Celtic Park is our Mecca.

After all, it is unmistakable to think that it is the Irish part of our identity which give us a worldwide support and hope for many, many thousands.

Let us also never forget that it was Ireland which gave us our club.