We are Celtic supporters 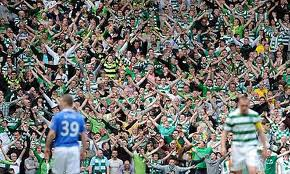 I feel, as someone who doesn't wet the bed every time someone else sneezes, I should say a few things just now. After the hysterical reaction to Dens Park, and the army of do gooders trying to tell everyone else how to run their lives, a few things need said. First of all, let's get the easy stuff out the way, people like John Hartson are paid to put their name to an opinion. Therefore it is not a worthy opinion and can be dismissed immediately.

Now, the Celtic supporters in Dundee, most of whom would have paid around £40 just to be there, got a bit lively. Wow. That's what happens when you're in the boozer all day. It's been happening since Moses wore short pants. The same way folk go out on work night's out at Christmas and get hammered.

Funnily enough, no one gives a toss about that.

So if we are really going to have a national debate on folk having a drink before the fitba, that's my ten cents.

Then, of course, we get the desperate race to somehow pin all this on The Green Brigade. Like they are an outreach of Opus Dei and have plans of world domination and sit in some underground bunker, plotting and scheming.

Here was me thinking they were just Celtic supporters who like to give the team as much support as they can.

As far as the songs go, I say again, you want different songs? Go to the game and sing them. You want folk to stop singing certain songs? Then let's have a proper debate but don't insult my intelligence by telling me that rebel songs haven't been part of fan culture since time immemorial. Similarly, don't even try to convince me that you're striking a blow for the Republican Movement by drunkenly chanting "Ooh-Aah Up The Ra"

Now, can we all get back to hoping Celtic win every game please?

PS
Like Celtic, I need a winter break. So I'm taking a couple of weeks off from blogging, tweeting and so on. Hope you all have a happy, healthy and zombie free 2013.
Posted by Paul Larkin at 4:50 AM