From Malcolm X to Lovely Anita 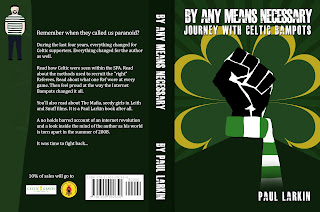 Well, a new book is approved and pre orders will begin in two weeks. This is the book I worked on when I was doing other books. If that makes sense. Partly because I was living the life anyway and partly because it's only now I could bring a book like this out. Coming in at 406 pages, far more than I thought it would be, this is a look at what has happened with Celtic supporters in the last four years, the rise of the Internet Bampots and what has happened to me in the last four years. That last part isn't a vanity thing by the way, when you read it, you'll see why it took me ages to reveal most of the stories in it.

The book is my point of view so you may think some things are missing but it's from what I saw and experienced and I also never want you to open a book of mine thinking it is new material when it's something you've read 100 times before.

We start with the story of a former Grade 1 Referee and how he progressed through the ranks and what he saw was the norm in the SFA.

That will blow your mind.

This attitude within was the pre cursor for what made the Internet Bampots finally say "Enough".

After this, we go through my world, from the summer of 2008, as it completely collapses, the spin offs from that whilst interspersing with looks at some of the Internet Bampots we see today. I talk to people like Chris McGuigan, Graham Wilson, Phil Mac Giolla Bhain and Richard Swan, some in interview format, others to write about as they share things about the parts they played in the Bampot revolution.

All the while you will travel, fall and rise with me as some incredible situations are played out in my life, involving police, The Mafia, The Latin Kings, strange landlords and a lot of doctors.

There are laughs aplenty as well, with stories from early 90's Leith and late noughties Atlantic City.

There are encounters with gorgeous women, uptight cops and reunions at Yankee Stadium.

There will be drinking sessions aplenty from The Bronx, NY to Whitehall, London.

You'll go behind the scenes with the HomeBhoys, LostBhoys and Beyond The Waves as well as reading my take on why some people amongst the Celtic support hate me.

There is then an expert analysis about Rangers dying and what the impact was across the board.

There are many, many more things as well.

I hope there is something in it for everyone and that you'll get what the overiding message of it all is.

So on Halloween, dont go trick or treating until you buy...
Posted by Paul Larkin at 12:32 PM