Book Launch and beyond 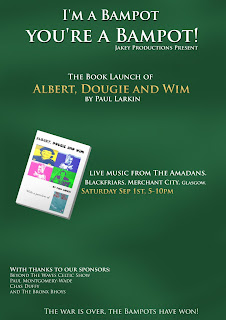 With just over a week to the Book Launch, we are at the stage now of mapping out the night to make it as fun as we possibly can. The night itself is now full. @brummiebhoy will be on the door and will tick your names off as you come in. Hopefully the place fills up quickly after the game and we get cracking. There will be a few words spoken, some questions, a raffle and the band will be playing a rocking set.

In amongst that, there will be book signings and 20 for sale. If you have a book already and want it signed, please do bring it.

The raffle will be drawn at the end by a special mystery guest.

There are lots of aims for the night and all of the above covers it.

My role has been minimal thus far, all the behind the scenes work is done by @brummiebhoy and these nights could not happen without him.

A fun night with a serious message and serious cause benefitting.

After that, I'll be finishing off my new project, my last Celtic book in a long time, and I hope to have that out on October 26th.

This will be my third Book Launch, first was in The Celtic House in The Bronx, second in The Admiral in Glasgow and now here we go again. For the next book, I'd like to try something different to launch that, watch this space.

Until then, hope all of you who bought Albert, Dougie and Wim enjoyed it and I'm looking forward to meetimg you all, quite a few again, next Saturday.

In the blogs leading up to the launch I'll try to provide as much insight into the books as possible.

Speaking of books, Albert, Dougie and Wim is only on sale until Sep 3rd. So if you want to buy, the links are: