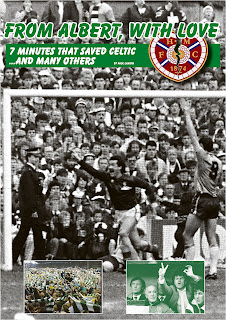 So, I've been working hard this week. Getting a lot of things up to speed so I can focus on some new projects at long last. The first of these is going to happen tonight and I am so happy on the basis that it came from an email alert from someone else. About five weeks ago I was contacted by a guy called Sean who is a member of the blind Celtic supporters who sit just behind the dug outs at Celtic Park. Sean said he had heard about my books but had no way of reading them but wanted to wish me all the best anyway. A grand gesture indeed.

It took me about six hours from then for the penny to drop.

So after talking to a few of the @hailhailmedia crew I am now in a position to get the ball rolling and actually start to make this happen.

So tonight I am going to record a test sample of From Albert, With Love(and then of Wim's Tims and Poles 'N' Goals and Hesselink in future weeks) in 30 minute segments to see if it works and what would need tweaked to do the whole book.

I'll appreciate any and all feedback, good or bad, so it can be made as good as it possibly can for actual release.

The samples won't be perfect and I'll no doubt be stuttering and slavering in points but, as someone else said, it's just the beginning....

Stay tuned.
Posted by Paul Larkin at 5:26 AM