Do you know who you are? 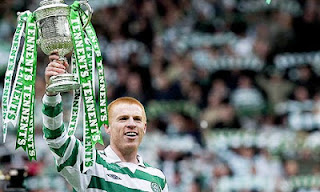 "I'm gonna blow my own trumpet" Shaun Ryder once sang. Now I am going to. On October 31st last year I wrote this blog

Yet there are people out there today who, despite a Championship win, still think Neil Lennon isn't the man for the job. I've got no problem with anyone who disagrees with Neil's tactics, team selections and so on, I have myself, but see if you're seething about him confronting the Rangers season ticket holder on Sunday, do you know who you are?

I was at the game on Sunday and was absolutely seething at the end. Ray Charles could see it wasn't a penalty whilst Stevie was still Wondering how Ian Black managed to escape a red card. For those who say that Neil should have confronted Euan Norris in the tunnel, have you forgotten Ibrox already? Neil tried that, got sent to, I would say "the stand" but we know he wasn't even allowed to sit there, and then Calum Murray and Iain Brines sent in totally conflicting reports of what happened. If you didn't feel like Neil Lennon at the end of that game on Sunday, do you know who you are?

We have a leader at Celtic who does not want to "know his place, "bend at the knee" or "take it on the chin". I am thankful for that. I want passion, I want fury and I want to know the guy I entrust with my mood every weekend is going to hurt as much as I hurt when we lose. I don't want some soulless Easter Road type environment around Celtic where Pat Nevin types can claim the moral high ground whilst being rode ragged season after season by anyone who fancies it. I want to be fighting tooth and nail for everything league, cup and point.

That's what I want from my leader, I know who he is.

Do you know who you are?
Posted by Paul Larkin at 2:45 AM