A corny title I know but Saturday's game comes just two days shy of the 24th anniversary of another Celtic-Hearts fixture that shaped a lot of our Centenary Year. After a decent start, we had a poor October but the signing of Joe Miller from Aberdeen for 650,000 had reignited our season and we had gone into this Hearts game on the back of a six match winning run with no goals conceded. Ironically the last league goal we had conced was to Hearts at Tynecastle. One other quirk was the fact that the board had handed out leaflets, well they didn't personally do it, asking a section of The Jungle to cut out unacceptable chanting. The chant in question was about Ian Durrant. 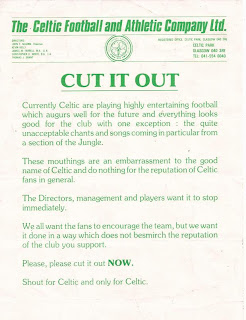 Hearts went two nil up in the game, one goal a fine counter-attacking one, scored by Robertson, the other a horrendous mistake by Rogan that Galloway disptched. In between these was one of the worst decisions I've ever seen at a football match. Walker crossed for Billy Stark place a beautiful header past Henry Smith only for Brian Whittaker to push the ball away with his hand. Decsion? Play on.

With nine minutes left, it looked like Hearts would get the two points. There was a crowd of 44,000 exactly there, which was a shock to the guy on our bus who played a part in printing all the tickets Celtic sold and they had printed 56, 442 (I checked) We got a penalty with nine minutes to go that Jambos still claim was outside the box and Andy Walker dispatched.

It all looked in vein until with 90 seconds left Paul McStay smashed in his first goal of the season to get us a draw and produce a celebration that still produces goosebumps on viewing.

*Thanks to the Celtic Wiki for the pics.
Posted by Paul Larkin at 5:36 AM