When Mark McGhee was King 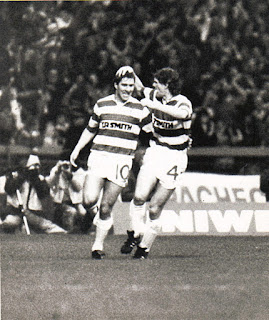 23 years ago today was one of the most eagerly awaited Celtic-Huns games I can remember. The previous encounter has seen us lose 5-1 at Ibrox, the like of which I'd never seen in my life before. So when they came to Paradise on November 12th 1988, revenge was in the air. I distinctly remember folk saying on the bus through "1-0 will do me" but we did dare to dream a little.

It was a Saturday 3pm KO and so darkness was descending by kick off. The Huns had not won at Celtic Park for eight years then and their support came that day expecting that long run to be over. I have to be honest, when Mark Walters scored their usual penalty, I did too.

Then something wonderful happened.

Trying to clear a cross, Terry Butcher planted a beautful diving header right past Chris Woods to bring us level. I can still see Butcher now, faced down on the turf, punching it in frustration. We had them on the rack then. Paul McStay was running rings round Ian Ferguson in midfield, there was a scramble and Mark McGhee scored a beauty right into the bottom corner to put us 2-1 up and send most of Paradise into delrium.

I always remember Mark's celebration that day, running right past the main stand, right arm going round and round before Roy Aitken caught him to congratulate. We were still going crazy when Billy Stark deflected a shot past Woods to make it 3-1 at half time. 3-1 at half time, yaaas, we can avenge this right now.

Sadly, we didn't. Try as we might, and Paul McStay again gave everything, we just could not get the 4th and 5th but gladly took the three points anyway.

When I got home that night My Ma was watching the Esther Rantzen Hearts of Gold and the whole Celtic team were on it. Pre-recorded obviously but things like that were always good.

As is demolishing The Huns when they think all they have to do is turn up and win.


*Thanks to The Celtic Wiki for the photo.
Posted by Paul Larkin at 6:59 AM