Roamin in The Bremen 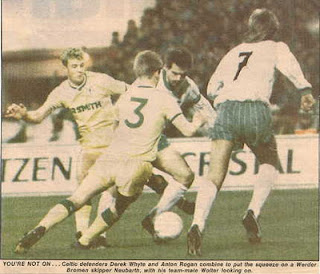 23 years ago today I was in Bremen. On a freezing cold night, I saw Celtic get a 0-0 draw which wasn't quite enough to get us into the quarter finals of the European Cup. I was young and daft at the time, as opposed to being old and daft now, but to think back it strikes me now that pretty much all European trips then were rated on how close to Amsterdam did the opposing team play. This was long before the days of just hopping on planes (I was on a plane to get to America in 1987 and then not again until 1997 for a trip to Dublin), so you knew that you'd be on a bus to Dover for 10 hours before even hitting continental Europe. Dover was the only port that allowed football fans to travel through after a mass riot between West Ham and Man Utd fans a few years previous.

So when a draw came in, draws were always made on a Friday afternoon then, most of us prayed for Holland obviously, or Germany. A bus then would cost you around £60 which included a one night stay in a hotel (Although I don't think the place we always stayed in Amsterdam could honestly call itself a "hotel", something sounding similar perhaps) and from memory games were always played on a Tuesday or Wednesday. The Bremen game was a Tuesday night so that meant the bus would leave on a Sunday afternoon,  then you'd in Amsterdam for Monday morning, allowing for stops and the ferry.

The trip from Scotland to Dover was very boring, you'd drink yourself into a stupor, sing like fuck and eventually realise you were only at Carlisle. Back then the second you entered England was always the cue for non stop chanting and tapes being turned up.


The ferry was always bizarre, you were only on it for about an hour but everyone made the most of it. I remember going to Hamburg in 1996 and the whole of the bar was singing the Jorge Cadete song, next thing a hun comes in and to a man everyone started "Oh spot the looney, spot, spot, spot, spot the lunatic"

Off the ferry and back on the bus most folk would try and crash out but invariably there would always be one guy annoying everyone. One trip, to Berne, this guy was trying to chat up a girl whilst everyone else was trying to sleep, eventually another guy got up and walked up to them and said "Listen hen, either shag the boy or tell him to get to fuck so we can aw get some kip". And they say romance is dead.

You'd arrive at your hotel bleary-eyed, stiff,  but glad you'd made it. There would be a quick dash upstairs, wash, change and out. This would be the point where everyone would feel human again.
After a long night in whatever city you'd been in, most would crash out around 4am and get some much needed kip in an actual bed. Some though would stay up and you know them as they'd be the ones face down in their ham and cheese at breakfast.

The day of the game was always a recovery/come down as not only would you feel rough, it would dawn on you "Fuck, I've gottae go to this game" See before wins at At Ajax and knocking out Barcelona in the Nou Camp, there were horrid defeats everywhere away in Europe then and goals were like Hen's teeth.

After the inevitable glorious failure, you'd trudge back on the bus and it would hit you, you're on this thing now for 24 hours minimum, save for that hour back on the ferry. The time you got back in Scotland you looked like you'd just done 3 months trekking in the Australian outback.

Then you'd get your Maw or Wife saying the immortal...."Enjoy your holiday then..."
Posted by Paul Larkin at 7:23 AM

Email ThisBlogThis!Share to TwitterShare to FacebookShare to Pinterest
Labels: Celtic