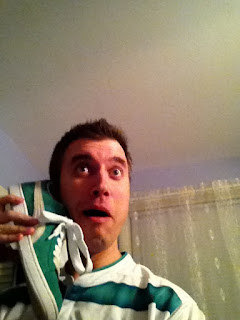 There is a man in America who is fast becoming the voice of Celtic in America. The thing is, that voice could be a Beatle, Harry Redknapp or Arsene Wenger. Let me explain. For those that don't know there is a fantastic online Celtic radio show on every weekend called Beyond The Waves Celtic Show (@btwcelticshow)

The host is a man called Graham Wilson and if you aren't an avid listener by now, you really are missing out. With regular co-hosts The Coach(when he shows up), The Rev(when awake) and Seamus(when not on his Honda 50, it's four Americans with huge hearts talking Celtic with all the passion and knowledge you'd hear in Bar 67. No topic on Celtic goes uncovered and punches are not pulled, which attracts me right away.

Ok, enough of that, the main thing is it's absolutely hilarious. Graham as anchor can do impressions, songs, jingles, you name it, he will bewilder you with it.  You can Skype into the show and take part, there's always some great debate and absolutely loads of laughs.

I've been on the show a few times, shamelessly plugging, and from one week to the next you never know what will happen despite a show outline always expertly prepared.  Graham, like all the guys, is someone as Celtic coarsing through his veins but also, I think, does not know just how funny he is.

So my advice to you is listen and call in.

You might even get your own jingle....
Posted by Paul Larkin at 7:48 AM

Email ThisBlogThis!Share to TwitterShare to FacebookShare to Pinterest
Labels: Beyond The Waves Celtic Show, Celtic