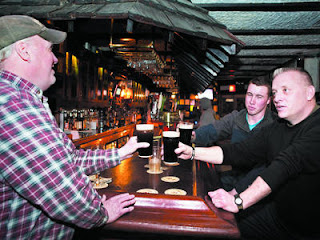 I don't think I've ever written a blog that has seen me get as much abuse as I got yesterday for the 9/11 one. I got a couple of emails in saying America deserved it, I expected that, and I'll have that debate happily, just not on September 11th. Anyone who knows me, knows what my politics are and for almost everything I am farther left that Fidel Castro and as Republican as Gerry Adams. That does not mean I can't take time out to feel sympathy and mourn with people who lost loved ones, no matter what happened. If you can't handle that, it's not my problem.

However the most abuse I got was from the dark side. I got tweets and emails from people revelling in the massacre. None of them came from Islamic extremists. You see your average hun sees America, and New York in particular, as some sort of Tim paradise. Well, you know what, they are right about New York. So, to them, as one so eloquently told me:

"It's a win-win for us, aw you Irish-American Catholics get killed, then the Army go over and blow up aw the fucking Arabs, fucking magic"

Except, I know the fly in that particular ointment. In the picture above (closest right) is one Kenny Keegan. Kenny is Irish-American, a former Altar Boy, a diehard Irish Republican, Celtic supporter and, oh yeah, a US Marine who has done more tours than a New York Sightseeing Bus. A neighbourhood guy from Queens, Kenny can take on and beat anyone, period. On tours in places like Afghanistan and Iraq, he takes his I Pod and dock everywhere, for one reason specifically, to blast out Rebel songs anywhere he can in the earshot of the British Army. The Brits don't know what to say, Kenny says "and we're all off to Dublin in the Green..."

What else would you expect from a man who grew up near "The IRA Block" in Queens?

See for guys like Kenny, they love their country, they are proud to serve it and they don't get involved in all the bullshit surrounding it, they just do their job&he's as far from some Arab-Hating Warmonger as Michael Moore is. The other thing is, you, and I am speaking to the normal people reading now, may have an opinion of America and it's army that is all about what they've done and why they should expect to be hit back, that's fine, your entitled to that. Like anything though, there is grey area.

Or in Kenny's case, green area.
Posted by Paul Larkin at 5:49 AM

Email ThisBlogThis!Share to TwitterShare to FacebookShare to Pinterest
Labels: 9/11