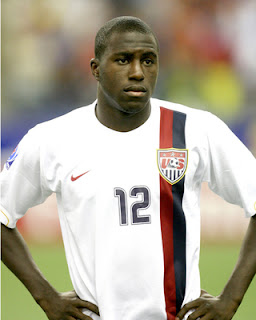 The US national team has a remarkable quirk from the last twenty years. Five players who made the team, come from a 12.5 mile radius of each other. John Harkes, Tab Ramos, Claudio Reyna, Tony Meola and Jozy Altidore, were all born or raised in Northern New Jersey, Kearny, Belleville and Livingston to be exact. Harkes and Meola went to Kearny High School, Altidore to Boca Prep, whilst both Ramos and Reyna attended St Benedicts(any hun readers have now just fainted)


This is an incredible achievement from such a huge country and this area of New Jersey is clearly the home of football in America, with all players influence easily seen on the streets of particularly Kearny and neighbouring Harrison where the NY Red Bulls now play.

Anyone with a knowledge of Celtic in America will know that there is a huge CSC in Kearny, which also happens to be the first ever CSC in America. "The Mother Club" has played a huge part in promoting Celtic in America over the years and this includes hosting various Celtic Boys Club teams over the years when they played American youth teams over there(There is even a tale of members of the CSC playing and beating a Celtic Boys Club team after a night on the bevvy!).

The problem lies in the fact that all the players mentioned, bar Altidore, played against Celtic Boys Club on numerous occasions and all would have jumped at the chance to sign for Celtic, none were spotted, none were asked, all went elsewhere. Why was that? Lack of communication? Lack of working together? Maybe. There is a lesson there for all in the modern day, work together, for the good of Celtic, always.

Incidentally Altidore was spotted at 16 and Celtic were alerted. I know this cause I alerted them on someone elses behalf. Gordon Strachan had a look, wasn't interested. Just over a year later Altidore was sold to Villareal for $10m.

the huns have signed a few yanks over the years, Walter Smith has a place in NY and can be known to be seen propping up the bar in McCormicks. He keeps an eye on the US scene, we apparently don't really.

Now more than ever communication, working together is vital, whether it's to sign good players, get more support or even just to see Celtic on TV in the US.