Sing me an old fashioned song 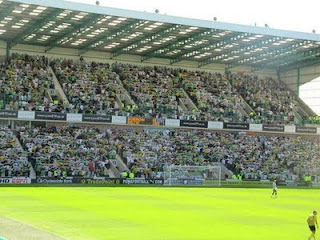 There is clearly an, if you'll pardon the pun, amped up, campaign against the songs some Celtic supporters sing at the minute. For their own reasons, there are a section of people who cannot take hearing the word "IRA" in any song unless the words "FUCK" and "THE" come before it. This is not a new thing but there is definite upsurge in people who are offended by it or maybe just an upsurge in outlets they can let you know on.

I don't proclaim to have the answers to this debate, in all honesty I'm sick to the back teeth of it, but I do have some opinions on it. Up until I moved to America in 2006, I didn't miss a Celtic game in 19 years, Falkirk at home in May 1987 to be precise, and before that none since 1983 when I was first allowed to go to Ibrox. I am a Republican and always will be. I'm not going to attempt to try and "flash yer credentials" as James Sanderson would have said, I don't need to justify myself to anyone bar her indoors and I struggle to do that so would have no chance with you all, but I feel qualified enough to have some opinions.

First off, standing half cut at a fitba match chanting "Ooh-Ahh Up The Ra" is offensive. It's offensive to anyone who has ever been involved with or contributed to The Republican Movement. The struggle was about lots of things but retaining a measure of respect was always a huge part of that. Now I've met a few people in The Republican Movement over the years, guys, like Gerry Kelly for example, who have forgot more about it than any of us know and guys like Jim Slaven who has been furthering and promoting The Republican cause in Scotland for the last 25 years at least. On the numerous marches Jim has organised, rule no1 was always to weed out drunk idiots and stop them from embarrassing us. As a Celtic support, we should take note.

It has to be said though that every support has idiots, every one of us has stood or sat beside someone and thought "Aw naw" and the vast majority of us have probably been the other guy too. I've been to a few games in England and heard disasters being mocked, Gas chambers being sung about and dead kids laughed at, in Glasgow there is no monopoly on offensiveness.

The Provisional IRA are of course long gone now, I know that will shock some people who they are still fighting but they are now actually governing in the north of Ireland and people in Scotland need to stop fighting in their heads. That said, songs like The Boys of The Old Brigade and  Let The People Sing wonderful songs about freedom and strength in the face of oppression and, quite frankly, if they offend people who are offended by our existence alone, then they can Pogue Mahone.

We need to be sensible here and not give our enemies an in, chanting Up The Ra after a few bevvies in a stadium doesn't do anyone any good, and I've done it many times in the past, but we are fortunate in that now we don't just have an away support at Celtic, we have movement because when you're in a bar in some remote location at the crack of dawn and you see that kind of thing (pictured) happening, your heart is leaping out of your chest and don't let anyone tell you different.
Posted by Paul Larkin at 11:10 AM