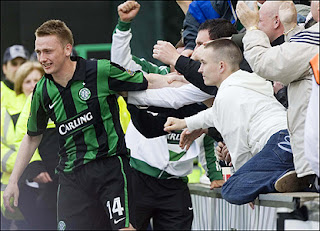 Derek Riordan has left Hibs to sign for Shaanxi Chanba in China. I've heard all the jokes about how many minutes he will last there and so on but, for me, the most interesting aspect of it was this quote from him:

'I've been playing in the SPL for a long time and it's getting a bit boring. I remember sitting on the bench at Hamilton last season and there could only have been about 2,000 punters there. That wasn't great"

Quite frankly if Derek Riordan is bored with the SPL, God help the rest of us. The game in Scotland is dying right now and has been since the petty, vindictive decision by the smaller clubs of the SPL to go with Setanta and consign the game in Scotland to a generation of being a backwater. We were told at the end of last year that change was coming. After meetings and press releases, no change has been made and the game slides further towards oblivion. Most clubs now are sitting panicking about season ticket sales, with very few fans now buying into season ticket plans and the ones who do choosing only to go to home games in the main. It is a terrible culture designed to give clubs a budget every year that could attract the very men who have killed the game in Scotland, the CEO's. Once more we face a season of half empty stadiums and most fans enthusiasm gone by September. Yet still they don't address anything. The fact that this season ticket culture effectively killed off the away supports of every SPL team outside ourselves and the huns seems to not matter a jot to the clubs who couldn't care less about that. Bizarre for men only interested in profit.

In my humble, oft demented, opinion, one of the reasons games are primarily crap in Scotland is the lack of an edge. Whatever else you think of Celtic games at Tynecastle, the fact is, it's now the biggest game in Scotland outside of a Glasgow derby and when all was said and done after the disappointment of last season, what would have made it ten times worse would have been Hearts stopping us win the league(especially when you've written a book about us stopping Hearts winning the league....:-)

I hope Riordan does well in China, for someone with his obvious talent he has done very little in football and has made a complete mess of his career thus far. With a new daughter and a family life perhaps the fact that he can go in any nightclub in China now won't actually matter to him, then again...
Posted by Paul Larkin at 10:03 AM