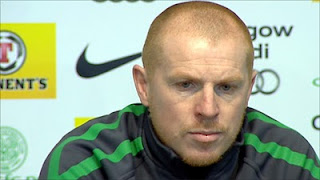 Celtic now face the biggest end to a season since 1948 when a Jock Weir hat trick saved the club from relegation at Dens Park. Football seasons go on too long now, there's just too much and by April you're kindae sick of of it if truth be told, you just want it wrapped up and to go on your holidays. Not this season. Now is the time we need to be more enrgised than ever. What I am frankly sick of is, to quote Irvine Welsh, "the most fucked up scum that were ever shat into creation"

As Celtic were cantering to the league in January/February, a plan was put in place, to unsettle the Celtic manager at any and every opprtunity. Bullets in the post, fake nailbombs, death threats, a media campaign to blame him for every ill in Scotland and a constant extreme provocation from every talking head fuckwit the BBC employ. It's worked. Our manager had to move house, get 24 hours security and his kids can't go to school.  The thugs are winning and laughing about it as wel("What's it like to live in fear")l. My own view was that Celtic should have pulled out of football the minute this started until the authorities actually did something about it but we know there is very little backbone at boardroom level.(Has anyone heard Dermot Desmond comment once on this?)

It sickens me to the bone that Scotland rejoiced in the huns recent win against us rather than look at the facts, huns win=violence, domestic or otherwise, way down. They are allowed to actively promote a rancid sectarian organisation and still not get any of the blame for the Celtic managers constant threats.

It is time now for every Celtic supporter on the planet to unite behind the Celtic manager. This is our Cause.

A worrying trait I've noticed amongst Celtic supporters is their willingness to have vile bigots and racists on their social networking sites. Are you ever going to wake up? They hate you and always will, and having them on your site makes you look like a stupid naive fool. To quote to The Specials "If you have a racist friend, now is the time for your friendship to end"
Posted by Paul Larkin at 7:27 AM