Is the panic button now part of football for good? 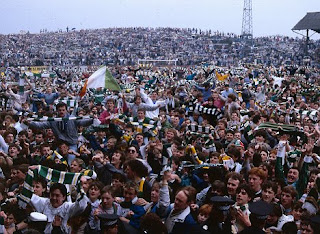 The sacking of Chris Hughton didn't really surprise anyone. Newcastle are a club run by baffoons and supported by football illiterates. A succession of good managers have been hounded from there under the delusion that it is a big club, so spare me any sympathy for Newcastle fans. The bigger picture of course is that football, especially in Scotland and England, is imploding. The amount of incompetents who run clubs these days is truly staggering, we at Celtic have had our fair share over the years, but right across the board now it is destroying the game. One look at last weeks farce with the World Cup bidding tells you all you need to know about the global game too.

I was talking today with a friend of another club who was saying that the instant access fans now have to share their views about football is one of the worst things in it. I tend to agree and completely understand the irony of me doing so before you say it. Years ago, the one fundamental about phone ins was that no one who went to games called them.  Pure and simple, how could you? You weren't going to miss the supporters bus home to run to a phone box. So you could put down the fact that all then people calling in were nuts as they weren't at the game caller. Even though very few ever were going bananas then about what was happening in football, it was almost always what someone on the show they were listening to said. Now though, people phone from the game home and that leads to one thing, panic. I used to think no one at the top level of clubs ever listened to fans but more and more so they are and unfortunately the ones whose views they hear are the ones who can shout the loudest. So inevitably, the panic button gets pressed and the manager gets sacked.

The corporate mentality that has started an explosion from within football means that chairman and directors justify sackings with bean-counting and business-speak. These people need driven from football and Mike Ashley is their embodiment. Fans are fighting back against it, FC United being a shining example, but there is a long, long way to go.

Thinking back to the 1985/86 season, Love St 86 is still my all time favourite Celtic day simply because it epitomised what Celtic are all about. A closer look at that season though reveals some interesting things, there was a three week spell where we lost to Dundee Utd 3-0 at home, Aberdeen 4-1 away and the huns 3-0 away. We got knocked out of both cups at the Quarter Final stage by a pathetic Hibs team who just avoided relegation and we were knocked out of the Cup Winners Cup in the first round. If this was now, would Davie Hay have survived any of these incidents having won only one trophy in two years? Not a chance. The panic button wasn't pressed though and the picture up top was the result.
Posted by Paul Larkin at 7:15 AM