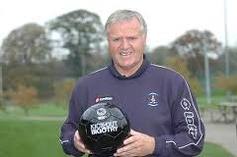 I'd like to thank Jim Jeffries today for providing Scotland with a much needed giggle. The biggest moaning faced bastard Scotland has known since Jim McLean is now moaning about people moaning. You couldn't make it up. Celtic fans are well used to Jovial Jim's inane drivel, this is a guy who when his Hearts lost 4-0 to the huns he said it was the best hun team ever, yet when Celtic did the same to his team he actually said "We were great in the last quarter"  this after losing four goals.  A guy who will surely meet his maker by exploding on the touchline, is complaining that Celtic are complaining about Refs. See that's how your average Scottish bigot thinks, they can do and say what they want, we can't do anything. Jolly Jim of course served a ban recently after claiming two of our goals against them should not have stood. After slaughtering the Ref he was sent to the stand. After the game he continued to slaughter the Ref only to have to apologise a day later after, to quote Shakespeare, slavering a load of shite.

The key point is this though, Jim Jeffries will not be pulled up for this by anyone, he's not Neil Lennon. It's what we have been up against since our inception and what this current war is all about. They say in any war the first casualty is always the truth, Joker Jim has just proved that.
Posted by Paul Larkin at 6:37 AM