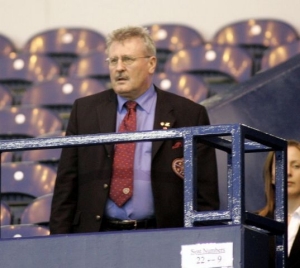 As CEO of Hearts, he was despised by their fans for pushing the clubs debt from £2m to £20m and then agreeing to sell Tynecastle to Stewart Milne with the aim of moving Hearts to Murrayfield indefinitely. Somehow that made him qualified to be Vice President of the SFA.

Chris Robinson is responsible for the current pricing farce in Scottish football after being the first guy to charge £20 to get into an SPL game, at a time when it cost £16 to get into Celtic Park. Hearts opponents the day he did it were Celtic. I think we are starting to get a handle on why he became Vice President of the SFA.

Not one for irony, here is a quote from Robinson when he made his bid for the SFA job:

""One of the reasons I have to stand is to stop someone like George Peat continuing in office. It is ridiculous that Peat takes Airdrie to the brink of financial ruin but remains as treasurer of the SFA"

Finally, here's a little known fact about Chris Robinson, as CEO of Hearts and Vice President of the SFA, he never once set foot in the boardroom at Celtic Park. Instead, when Hearts played there, he sat on the team bus until KO then took his seat. He never did this at any other ground. So that's why he became Vice President of the SFA.
Posted by Paul Larkin at 5:47 PM