This week, we are going to take you through a few of the people who devoted a lot of time to stopping Celtic, secretly of course, in their various capacities of power within Scottish Football, past and present. 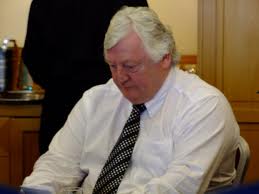 This man, who says his passions are line-dancing and cowboy movies, has long held a huge hatred of Celtic.  With a son who has stood for the Scottish Unionist Party(the same party Mark Dingwall held the post of Press officer for) you know what you're dealing with. A man who almost single-handedly ran Falkirk and Hamilton into the ground, sat on the SFA committee for years trying and a lot of times succeeding in hindering Celtic at every opportunity. A regular at Ibrox, his favourite haunt was the Lord Nelson pub, where a source for this blog witnessed the bold George appearing from on St Patricks Day 1996, before our 1-1 draw at Ibrox, wearing a Union flag bowler hat.

After investing in Radio station, the invite list made interesting reading when a certain Nick Griffin, shan yakked nazi leader of the BNP, was invited to take part in a discussion programme on the station.

I asked a Hamilton fan if they could sum up George Fulston in one sentence and I'll leave you with their reply: