FC Celtic, could it happen? 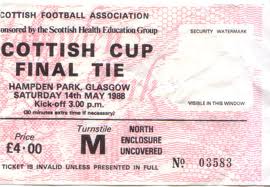 I read two stories about football this morning.  One was about the rise and rise of FC United, a club set up by Manchester United fans disillusioned with the modern game as well as the Glazer regime. The other was about Arsenal, a club which has just announced the first £100 non hospitality seat in the UK game. I am proud to say I am a founder member of FC United, for no other reason than I am a bit of a militant annoying person who loves anyone and anything that sticks two fingers up to the establishment.

The Arsenal story is alarming if not surprising. I admire the way Arsenal play the game although I fear should it becomes six seasons without a trophy at the end of this season, their fans will say enough is enough. Despite what a lot of you will think, Arsenal have a solid working-class fanbase. That fanbase started being eroded the minute the new stadium was built and prices started going like a show in the west end. I visited Highbury many times and the new stadium too and I know which I prefer, not least for the fact that in Highbury, you felt like you were at a football ground. At the recent tournament we played at the new Arsenal stadium, I bought one of their fanzines and read a story about a guy who had been on the waiting list for years for a season ticket who got a call from the club in the summer to say they now had one for him, "Great" he says, the woman then asked him how he would like to pay the £1490? yes, £1490 for a seat behind the goals, "It is quite high up so your view won't be restricted" the woman protested after the guy said "clucking bell" or something like that. What a selling point, eh?


The fact is this is another example of the people at the top of football having not the first clue about the people who pay their wages. It's happening more and more at Celtic, and you may think our prices would never get that high, well it's £40 for the next game at Ibrox, why? Because we charge them the same.
Coupled with this club's increasing trend of victimising its own support, something will give soon.

FC Celtic may a long way off and might never happen, but don't say you weren't warned if it does.
Posted by Paul Larkin at 5:57 AM