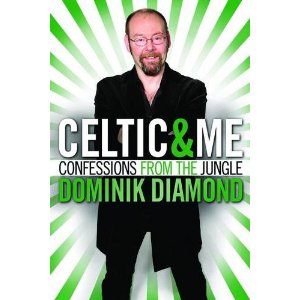 Dominik Diamond is well known amongst the Celtic Family. He's one of the few Tims with a platform who hasn't sold us out just make an extra few quid. TVFP caught up with him today and he was kind enough to share his thoughts.

Please also buy his book, which just happens to be one of the funniest, most honest accounts of anyones life that you're ever likely to read.


1) You're in Canada now. Can you give us a little insight into what it's like keeping up with Celtic games there for you?

Total nightmare of 830am shitey blurry feeds that stop and start. One minute Samaras is taking the ball on the left, the next minute he’s on the edge of the box. Then he freezes. Then it’s ten foot away from him. Actually that sounds like one of the more flowing feeds… Time difference is a real pain as well. Not so much kickoffs at 830am but Sunday games that finish 5 minutes after the family leaves for Mass.

2) We are in the midst of "Cheatgate"(aren't we always!), what's your take on the whole thing and referees in general?

About 16 years ago a Celtic fan sent me the most humungous indepth dossier he’d written going back decades on individual matches and refereeing decisions against Celtic he thought were dodgy. It was like War and Peace. I thought he was slightly crazy. I hope that guy now feels vindicated. My worry NOW though is that there is going to be a riot or a pitch invasion or another coin thrown when a ref gives a decision against us. That’s not going to help the club at all.

3) You seem to have done many things in your career, what would you describe yourself as? Presenter, DJ, Author or all round Global Phenomenon?;-)

Writer and Pish-talker for hire. Over in Canada they now call me an Announcer. That sounds really posh. Like the guys who used to say when the telly had ended at night. I like that title.

4) What, in your opinion, is the best computer game ever?

5) You responded to online criticism of your book by signing up for messageboards and debating the points with critics, do you think the internet has changed the modern day football fan?

Totally. People can now say the most vile things under the cloak of anonymity. There is not editing of lies. Anyone can say anything. And the level of hate on the internet terrifies me. Not stuff written about me, although when people make stuff up it freaks me out a bit because I wonder about the state of people’s heads who do that kind of thing – but if I was a player or a manager? I’d throw myself off a cliff if I ever read some of the stuff on forums.

6) How happy are you with Celtic in general just now?

At manager and team level? Pretty happy. The team is playing really nice football, the manager gives a damn and I don’t think he’s made a bad signing yet. Then Rangers game was a setback, but not a season-killer. But the board are still a joke. They have reduced us to a team whose ultimate ambition is to win the SPL if we’re lucky by being stupidly obsessed with clearing debt at a time when plummeting interest rates actually made debt more manageable. I distinctly remember a time not too many years ago when we had Europe at our feet. I also remember a lot of fans paying a lot of money in those seasons. It can’t ALL have gone to Bobo Balde.

7) Who are the best and worst celebrities you've ever met?

I haven’t met many wankers to be honest, although the book does details my issues with Terry Butcher. Russell Brand and Robbie Williams are complete gentlemen, Glasvegas and The Fratellis are the loveliest people you could ever meet in the world, Noel Gallacher is superfunny. Worst of all is David Walliams who was a good mate of mine at University but changed after he started hanging out with Matt Lucas, which was a shame. You don’t need to do that. Simon Pegg, for example. Same situation – good mates at University but in spite of him becoming one of the funniest actor/writers in Hollywood he remains a good guy who still took time to write nice stuff about me in HIS book that’s just out!

8) You made a very memorable appearance on Celtic TV, did you get the sense they weren't too happy with your opinions at the time?

I got a sense that Jim Craig was about to poop his pants because that smile of his started to waver by a millifraction. There’s a whole chapter in the book about this, but that’s when the club really broke my heart. That said, I understand them being pissed off with me slagging off the board, manager and players but what did they expect me to do? Sit there and smile and fart out gentle platitudes while all the talk in the pubs and terraces was that of disaffection? Not my style.

9) Who's the best band around just now?

There’s a lot of American/Canadian stuff I’ve got more into since working in radio over here: Against Me, Tokyo Police Club, Marianas Trench, Tegan and Sarah. There's an awesome Blues/Roots band from Nova Scotia I've done a few things with called The Hupman Brothers who are awesome. Best new stuff I’ve heard from Scotland recently? The Stagger Rats and Hopeless Heroic.

10) Finally Dom, do you see yourself ever coming back to Scotland?

Never. Too much aggro for me back there. My kids have a life here without judgement or any possible retribution for the daft utterings of their Dad or their choice of football club or religion.
Posted by Paul Larkin at 7:51 AM