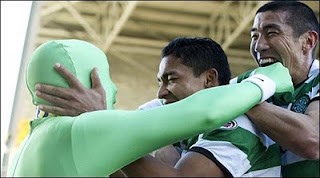 If the last week has taught us anything is that we need to fight our own battles. A quick browse over the online community will show two factions, one, Celtic supporters, demanding justice after decades of cheating. The other, the rest of Scotland who think we have a cheek to even complain. There's a lot of sensitive people out there so if you are of that disposition, look away now, MOST OF SCOTLAND HATES US. Anyone who denies that is deluding themselves. There is nothing that gets the ire going in Scotland more than when Celtic are complaining. One of the first things that happen is we cease to be called Celtic and are named "The Old Firm", bizarre. Then there is the legion of muppets lined up in the media, the Uncle Tims like Andy Walker, Murdo McLeod and Craig Burley, money being their God, all ready to stick the boot, play the appeasement card and keep the coins rolling in. Then of course, the rabid huns appear, Chick Young, Ewen Cameron, Keith Jackson, Bill Leckie, apoplectic that the fenians has dared question anything. Then we have the old Paranoia card, that has to be played, because no one is Scotland is bias of course, that's what we get hit with because they tell us no one is against us.  I could go on about the fact that the SFA tried to close us down in the 50's, but I won't. Let's just look at the last two weeks. Hugh Dallas lied, Dougie McDonald lied, Steven Craven told the truth. One of them has integrity, two of them still have jobs with the SFA. Can you guess who? Shall I walk you through it again?

Dougie McDonald is quite clearly a very arrogant man, a Hibs supporter who lives and works in Edinburgh, he has been at the centre of numerous controversies in Scotland, not just involving Celtic, yet seems to have positioned himself into a position of power in the game, as all Refs were ready to walk if he got sacked last week. McDonald strikes me as the type of guy you see in a pub and think "Aw ffs no him again", no personality to speak of, a company man to the last. He should have gone this week, the fact that he hasn't shows you why Celtic supporters are always going to feel hard done by. This is a direct quote from SFA Chief Exec Stewart Regan:

"You can call it a lie if you wish. I think there's acceptance that Dougie
said things in the heat of the moment that weren't true"

Imagine that was the EPL and that was the explination Alex Ferguson got after complaining? You'd hear him rage from here. That's the bottom line for me, there is no need for evidence, no need for ranting, no need to prove anything, you got it straight from the horses mouth that you can lie and get away with it, people will accept it. Of course they will, Celtic are the ones who suffer. And they wonder why the fans on the verge of an away game boycott...
Posted by Paul Larkin at 7:02 AM